Hello everyone, Sorry I haven’t written in so long! Things got super busy for a while with the kids as well as stomach flu’s and sinus infections.  However everyone is now on the mend and life is hectic and back to normal. Tomorrow I reach 22 weeks of pregnancy with our little boy! I can’t believe how fast the time has gone by.

My last two pregnancies with my girls were not so fantastic! With my oldest I was really sick almost the first few months. It was just a constant nauseous feeling all day and night, I could barely eat anything.  My skin was horrendous, I had horrible acne that I have never experienced before.  I also had horrible problems with my sciatic and many times wasn’t even able to get up from the couch if I was on my own because it hurt so bad.  I was also severely depressed, I would spend many days just sitting in my dark room crying.  I hated being pregnant, I thought it was horrible, I couldn’t understand how people said that pregnancy was such a beautiful thing and yet here I was going through a horrible time.  Now I was only 19 and turned 20 a few months before I had my daughter, so whether this played a role in it, I’m not sure.  I was also in a not so good relationship and was just not happy at where I was in my life.  The only and thing that I loved about it was feeling my baby kick and knowing that the minute she was born, my life would change for the better.  When she was born, that feeling of utter and complete love, something you never knew existed. She filled my heart and soul with love and I vowed that day in the hospital to only ever give her the best life possible.

My second pregnancy with my little Sophia wasn’t as fantastic either! I was so incredibly sick with her, to the point where I couldn’t even keep down water.  I felt nauseous all the time, I barely gained any weight.  I was also raising 3 children and on the go all the time, plus in the middle of a move.  I also had horrible acne with her as well, Things with her seemed so much different then they did with Hailey and I thought for sure that she was a boy.  I again had sciatic issues with her and when things finally started getting a little better, I ended up falling down the stairs and well…..  I only fell down about 3 stairs and had landed on my butt. It didn’t hurt and I thought nothing of it, that night I noticed I had a little bit of blood.  In the morning it still wasn’t gone, I went to the hospital and found out that I had a tear in my placenta and I was hemorrhaging.  I went into labour and contractions started.  Tim was away working and had no way of getting back until the next day.  I was rushed to a hospital by ambulance that could accommodate myself and Sophia as she would be early and would need a lot of help.  They had said that I would have her by c-section and that she would likely need to be in the hospital for 6 weeks after birth.  They gave me two steroid injections to help her lungs grow quicker.  They gave me morphine to help with the pain. It ended up stopping labour.  However the rest of the pregnancy was just a gong show.  I was supposed to be on bed rest, anyone with 3 kids at home knows that’s impossible!  I had non stop contractions all the time. I had to go to the hospital twice a week for NST’s and ultrasounds.  Then at 38 weeks they said I may still be bleeding internally, that I had lost a considerable amount of weight and that little Sophia was growth restricted and they wanted to induce me.  I think she just wanted out, she went from 5 lbs to  10 lbs within her first month.  I had no depression with Sophia, but I also had my hubby by my side and a life that I loved.

My pregnancy now! Wow, what a complete difference! I thought that I had morning sickness in December, but it ended up being a flu that the entire house got.  I have had no morning sickness with this little guy!  In the first trimester I was so unbelievably tired, I mean couldn’t keep my eyes open, falling asleep at 5:30pm ballet classes.  Having to take naps or just being so exhausted that I would stay in bed all day and rest.  I made a promise to myself that I was going to stay fit through this pregnancy and eat well.  In the beginning I still continued to work out, there were a few times I had to take a week or so off.  But I’ve still been going and as of lately being very consistent with it.  I feel fantastic, full of life and energy.  My biggest problem is just trying to get comfortable when I’m laying down.  I am already at almost 22 weeks bigger then I ever got with Sophia! I’m not used to how much it changes things.  I’m having a hard time bending over my stomach and just can’t do some things.  I also had acne but it is now starting to subside, which for me is huge! I started feeling this little one kick around 16 weeks and he has just gotten so strong! The kids and Tim can all feel him kick now, the kids love it.  Everyone is so excited, we all wanted a boy so badly and have all discussed it long before it happened. 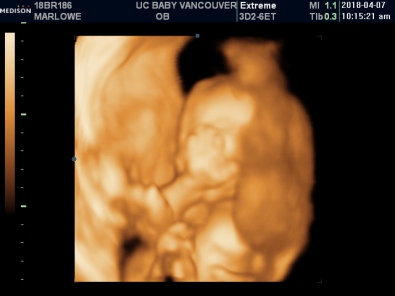 When I really look at the differences boys are very much different from girls.  With both of my girls their hear rates were always 170-180. The first couple times his heart rate was checked he was 172 and then 180 and now every time he has been 140, 132 and 135.  If it’s because he is a boy I’m not sure, but his heart rate is definitely lower than what the girls were.  Also with the girls I craved sweets and chocolate. This time I don’t really crave chocolate, I do love cake and always want it.  I crave sandwiches, pickles and French onion soup.  Also very different from the girls is how I am carrying this time. With the girls my bump started right under my boobs and my waist didn’t grow. I could wear my normal jeans right until the day I had them.  This time my bump starts so low that I have already had to get maternity jeans because none of mine fit me.  He is also sitting very low down and kick very low where as the girls were always kicking at my ribs.  I can only imagine how quickly these next 4 months are going to be, I am taking full advantage.  Enjoying every last second, I am happy, healthy and fit! I feel fantastic, he is healthy. I couldn’t possibly ask for anything more.  What have you experienced between pregnancies? any noticeable differences between your girl and boy? I’m curious to hear!!

This is a text widget. The Text Widget allows you to add text or HTML to your sidebar. You can use a text widget to display text, links, images, HTML, or a combination of these. Edit them in the Widget section of the Customizer.
Loading Comments...
%d bloggers like this: